Join Girl Scouts of Greater Chicago and Northwest Indiana (GSGCNWI) at our adult premier fall fundraising event,  Smart Cookies Badge Bash, this September 22, 2022, at Cafe Brauer in Lincoln Park. Hosted by our Associate Board, this event will give our supporters and community the chance to experience the fun and meaning of Girl Scouting firsthand, by meeting and learning from our Girl Scouts themselves.

At this signature Girl Scout event, we are showcasing a few of the unique experiences Girl Scouting provides at booths headed by girls in our council. Attendees will participate in hands-on activities and learn more about what Girl Scouting is all about. 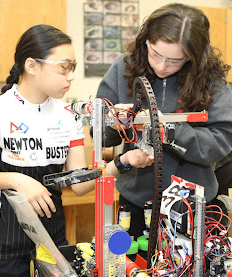 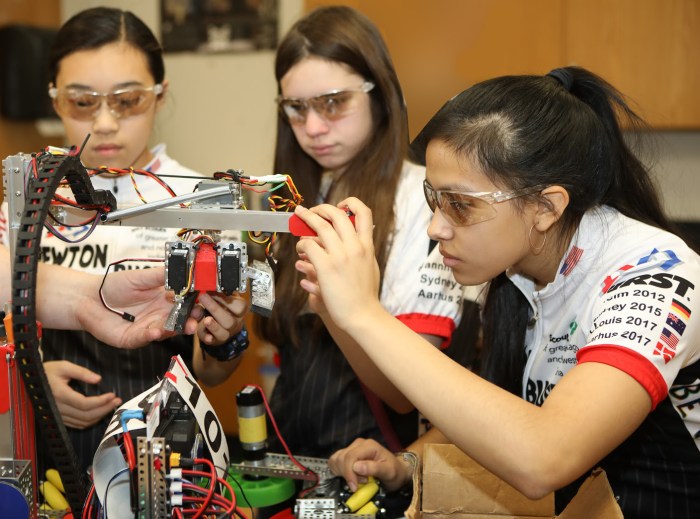 We are excited to feature the Newton Busters, the FIRST LEGO League World Championships competitors, who will be present at the Smart Cookies Badge Bash with their own booth! This is an incredible team of robot-designing Girl Scouts in 7th to 12th grade who utilize several programs to showcase their technical design and team performance at local, state, and national competitions. They aim to raise awareness that women represent 25 percent of the STEM (science, technology, engineering, and mathematics) workforce, and to increase the participation of girls in STEM activities through community outreach programs. Don’t miss out on a chance to see how these robots are made and get an opportunity to drive one!

Bring your “troop” of friends and test your skills in earning badges and patches, led by today’s Girl Scouts, while enjoying bites, beverages, music, and much more.

This event is for our adult supporters and community; the “badges” earned will be just for fun!

Eva Lewis is back home now after sharing her compelling message about empowering black girls at the United Nations International Day of the Girl event earlier this week in New York.

The 17-year-old South Shore resident was invited to speak at the event after gaining media attention from a July rally at Millennium Park she helped organize with three other teens.

It was her second time in New York City. Eva participated in the United Nations’ 60th Annual Commission on the Status of Women in March, but this time it was much different, she said.

“This was a much bigger event, with a lot of people watching all over the world,” she said, adding that at least 1,000 people were in the audience.

Eva, who attends Walter Payton College Prep, opened up the event with a spoken word performance.

“I really thought it set the mood for the event and the tone in the sense that we weren’t kidding and our voices should be validated,” she said. “I felt like it definitely got everyone’s attention.”

Eva also spoke at the event.

The marginalization of women, especially black women, is an issue close to her heart. There hasn’t been a shift in the conversation to truly address the inequalities that black women and girls experience, Eva said.

Issues like hypersexualization, human trafficking, sexual assault and domestic violence disproportionately affect black women, she said, but the main people speaking up about those issues are black women.

Her mother, Valerie Andrews-Lewis, and grandmother sat in the audience.

“I am very proud of Eva,” her mother said. “She really believes in what she’s doing and she did an excellent job of bringing awareness to the plight of black girls.”

Andrews-Lewis said she hopes some policy changes will occur from the message her daughter is spreading.

Eva has been a member of the Girl Scouts since she was 7 years old and the organization has really helped her create a platform and spread her message on a larger scale, she said.

“It has definitely cultivated me and my voice,” Eva said. “They’ve been so supportive of all my initiatives and political viewpoints, as well as helping me reach out to different media outlets.”

Without Girl Scouts, Eva said she probably wouldn’t have been invited to speak at the United Nations.

In 2012, Trayvon Martin was murdered, and my generation experienced a traumatic shock. The black-and-white photos in our history books of Civil Rights icons Malcolm X, Rosa Parks, and Martin Luther King Jr., along with photos of black people hanging from trees, weren’t just history — they represented our reality, too. Realizing that the injustice my ancestors fought against hadn’t been eradicated was discouraging. Simultaneously, it ignited a fire of anger and strength. My peers and I were upset that we would have to fight the same fight, but also ambitious enough to step up to the challenge.

This same fire has been fueled even more as we have watched many videos of black people lying in the streets, many put there by the hands of those who had sworn to protect and serve. Through the Black Lives Matter movement, my peers and I have been inspired to speak against these repeated acts of blatant oppression.

I attended my first protest in 2013, right before my freshman year of high school. My mother and I participated in a march down Chicago’s congested Michigan Avenue after the murder of Trayvon Martin in order to demand justice.

Since then, I’ve evolved into a poet, artist of other mediums, and outspoken activist. In August 2015, I started The I Project, an initiative to humanize youth affected by intersectionality through activist-inspired art. The I Project allows art to unite youth, and allows marginalized groups, not others, to pen their own narratives. Earlier this year, I represented the Girl Scouts of Greater Chicago and Northwest Indiana at the United Nations’ 60th Commission on the Status of Women in New York City. There, I gave a speech about my project and activism to a vast audience, which included prime ministers and politicians from around the world.

It was that experience that taught me the meaning of what it means to be an activist and advocate, and led me to join three other incredible black teen girls to lead more than 1,000 people from Chicago’s Millennium Park through Michigan Avenue, shutting down both directions of traffic, this past weekend.

A beautiful event unfolded recently at the Islamic Center of Naperville, where two Girl Scout groups met for an interfaith event that paved the way for a lifetime of understanding and friendship.

Heather Mieloszyk, a troop leader for her second- and seventh-grade daughters, was inspired to educate herself and her Scouts on the Islamic faith after some of the elementary students she teaches brought treats to school to celebrate Eid, the holiday that marks the end of Ramadan, during which Muslims fast daily from sunrise to sunset.

The students’ parents put Mieloszyk in touch with Saima Hasan, a program director for the Girl Scouts troops who operate out of the Islamic Center of Naperville. Hasan and her fellow troop leaders got to work planning a day of fun and fellowship.

The Daisies (kindergarten and first-grade Girl Scouts) greeted each visitor with a flower. The girls shared snacks (cupcakes and dates) and created pins with different colored beads to swap with one another. The visiting girls learned to write their names in Arabic and received bookmarks with Arabic phrases of goodwill translated into English.

“Today’s youth should serve as tomorrow’s ambassadors of peace in a troubled world,” Hasan told me. “They would use their positive experiences with various cultures, religions, races and ethnicities and build a world of understanding, which in some way will contribute to the healing and prosperity of this great nation.”